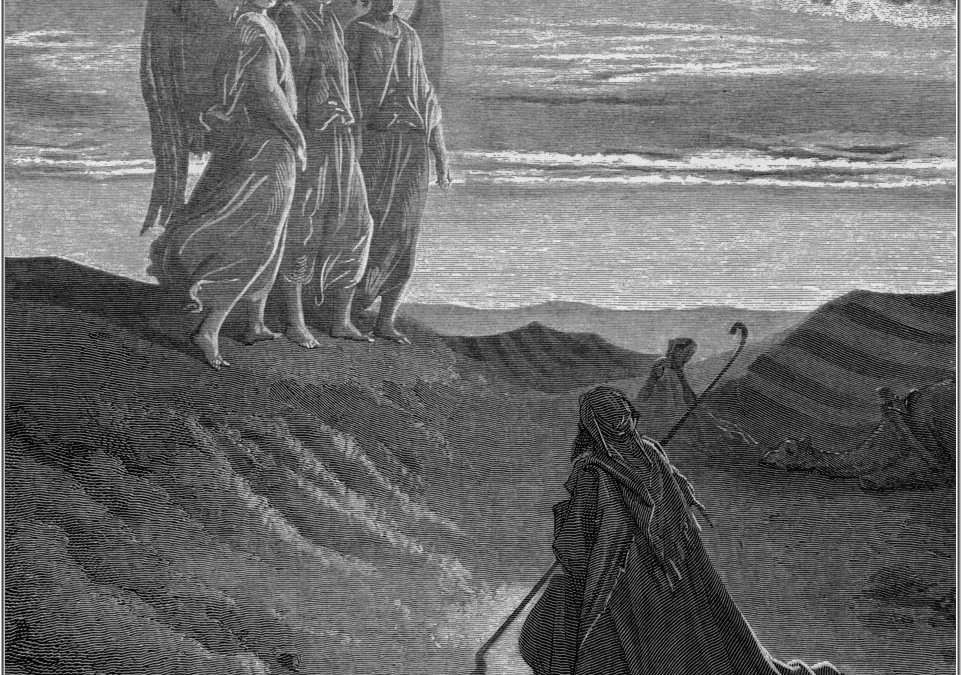 Here I was in Hawaii for my first time, visiting my sister-in-law Rachel. Rachel had found me a massage table so I could see clients. She put the table in a cute little bungalow, under a window facing the greenery. Everything looked quite normal when Rachel’s friend asked to see me.

I started the standard 10 Step Protocol. I listened deeply and her body responded–self-correcting and then…reenacting and releasing scenes of being abused and choked. It was not your typical Hijack response. We were both surprised and had no explanation. Preparing for the Dural Rock, I moved my left hand under her occiput (back of her head) and right hand under her sacrum. Gazing absent-mindedly through the wall, I noticed something outside the bungalow striding toward me. It was an angel–a Christian one–tall, pure white, wings strongly attached to the back, no talk and all business.

The angel walks RIGHT THROUGH the wall, stands before me silently, reaches his hands out for the body–I mean the client–and takes the body as I lift her up weightlessly into his arms. Now, of course, this whole time the client is actually lying on the massage table with my left hand under her head and my right hand under her hips, but in the VISION–a lot more is happening!!!!  The angel turns around, still carrying her in his arms, and walks RIGHT BACK THROUGH the wall again. Through the window I see he has carried her to a spiritual pool of water, waterfall in the background (this IS Hawaii, after all), where she is now seated on a chair with a man scrubbing her back….

I pretend nothing has happened and finish the session. At the end, I tell her, a little hesitantly, “You know…when I was beginning the Dural Rock, this angel came and….” I tell her the whole story.

She is silent for only a moment. “Who was the man washing me?” she demands to know.

I’m into this treatment a little deeper than my teacher had prepared me for. But I’m not ready to give up–something hasn’t been revealed yet. I’m getting that it’s her uncle; she’s getting that it’s St. Germain. How can this be?

“Ask if St. Germain was at one time your uncle,” I tell her. She muscle tests.

“YES!” She replies. She glows; the whole room seems to light up. The whole session, in which we cleared her deep blocks and traumas, had been leading up to her realizing that her precious St. Germain had also found her precious, that they were forever linked in love and caring. The session’s crowning healing was her experiencing her divine worthiness, her emotional closeness to those spiritual beings who take good care of her.

She has more to tell me. “The past few months I had been praying to be cleansed, that G-d would cleanse me, and I didn’t care what it would take. When I heard you were coming to Hawaii, I knew I had to see you. Now I know why.”

A few months later, I was treating the head of a massage school. By then, I had noticed that craniosacral therapy is a virtual 3-ring circus. I do one thing with my hands; some whoosh of energy comes from the earth behind me and loops over my right shoulder and works on the client independently–usually around the legs; and a huge hand hovers over the person’s abdomen.  All this, and more, was happening with this client.

“I think you had some angels in the treatment,” I said quietly at the end.

“Oh, I’m sure I did,” she said airily. “Clients bring their own angels with them.”

“They do?” I was surprised that no one had mentioned this in Craniosacral I. It was the missing link for me. Of course a Christian would bring in a Christian angel, and someone else would bring in another angel meaningful to them. And of course I was likely to be unfamiliar with these angels, as they were not mine.

So I was really surprised when, at the end of the summer, my Craniosacral II instructor sarcastically imitated some client reactions:

“I’ve seen G-d!” he said with a false Holy Roller tremor in his voice.

His phoney cover-up was the last straw. “Look, I’m a nice Jewish girl,” I interrupted. “I had never seen a Christian angel before, and you guys did NOT warn us about angels!” I told the class about Rachel’s friend—and that her true healing was not that I did the 10 Step Protocol properly but that she had found her love and spiritual protection.

The teacher brushed me off. “There are 40 students in this classroom,” he announced officiously, “And you are probably the ONLY one who has seen angels.”  With that he changed the topic.

I did not believe him. Was I more special than anyone else? In fact, at break-time, of the 5 craniosacral practitioners sitting closest to me, 4 of them confided in me that they had seen angels.

“Not only that,” said the 60-ish man sitting in front of me, “The clients can see them too.  And my population are tough people who are not given to spacey things. I work in a small town in Colorado, where I’ve known everyone for decades. I’m old enough to have known their parents, and I know their parents are in the room when I treat them.”

What do YOU think? Have you ever seen angels that heal? Love to hear!

About the Photo   Behold three “men” [angels] were standing above him. (Bereishit/Genesis 18:2)    Rashi: “…and Raphael, who healed Avraham/Abraham.”